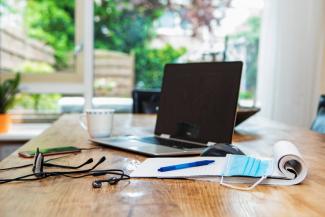 Working From Home Due to COVID-19? Here’s How to Make the Most of Tax Season

When the COVID-19 pandemic hit, many Canadians began working from home — some for the first time.

Ten months later, many are still working from home. If you’re one of them, you might have noticed you’re spending more on utility or internet bills than usual and your employer might not be reimbursing you for those costs.

In a regular year, Canadians working from home can claim some of these costs as a tax deduction. This year, the government is trying to make this process a little easier, since the working-from-home cohort will be bigger than usual.

For those incurring just a few small costs, such as utility bills and the occasional notepad, there’s a simple deduction of up to $400. Anyone whose expenses are more than $400 can fill out a simplified version of the customary forms needed to complete this claim.

Read on to find out how to prepare for this tax season.

How Do I Know Which Deduction to Use?

These new deductions and simplified tax forms are specifically for people who started working from home because of the pandemic, said Lisa Gittens, a senior tax expert at H&R Block. If you were working from home before COVID-19, you’ll claim expenses using the usual forms.

If you have been working from home due to COVID-19, the next step is to decide whether to use the simple $2-per-day deduction, which maxes out at $400, or if you’ve spent enough money to make claiming detailed expenses worthwhile.

To claim either the simple deduction or more complicated expenses, you need to have worked from home due to the pandemic at least 50 per cent of the time for a period of four consecutive weeks, said Gittens.

What Forms Do I need?

If you’re claiming the simple deduction of up to $400, you’ll need the T777S, which is a simplified version of the T777, the form normally used to claim work-from-home expenses.

If you’re claiming more detailed expenses, you’ll still need the T777S. However, you’ll also need the T2200S, which is a form your employer signs to confirm you had to work from home due to COVID-19. You don’t submit this form with your taxes, said Gittens, but if the Canada Revenue Agency (CRA) asks for it you’ll need to have it handy.

“That’s a point that I don’t believe the majority of taxpayers are aware of,” said Gittens.

The T2200S is a simplified version of the T2200, the form normally used when working from home outside of pandemic circumstances.

It’s important to note that a deduction is not the same as a credit. A deduction lowers your taxable income, said Gittens, which could affect the credits you’re eligible for, and could even lower your tax rate. So if you claim that $400 deduction, for example, your total taxable income for the year will be reduced by $400.

“The net income is what Canada Revenue Agency uses to determine if you are now eligible for other types of benefits like your GST credits, like your Canada Child Benefit,” said Gittens.

What Expenses Can I Claim if I’m Working From Home Due to COVID-19?

You can claim rent and utility bills, as well as home internet access fees, said Gittens — but not a hundred per cent. Instead, you need to calculate what portion of your total square footage you’re using as a home office, and claim the same proportion of your costs. For example, if your office takes up 30 per cent of your home, you’ll claim 30 per cent of those bills. This might change for something less tangible like a phone bill, though — if you used your personal cellphone for work calls, calculate how many of your total calls were work calls, and adjust accordingly, said Gittens.

You can also claim expenses that run out, she said, such as pens, paper, and printer ink — anything that gets used up during the course of your work.

And, you can claim minor maintenance expenses, like cleaning supplies or light bulbs.

If you’re a commissioned employee, you can also claim your property taxes, home insurance and the lease of devices like cellphones or computers used for work.

What Can’t I Claim?

While you can claim rent, you can’t claim your mortgage payments or interest or the other costs associated with owning a home, said Gittens (except for the already mentioned exceptions for commissioned employees).

You also can’t claim capital expenses, meaning if you bought a new desk or office chair this year, that won’t be eligible. That includes smaller capital expenses too, like a computer mouse or a monitor. Using the usual T777, you can claim a portion of these expenses yearly, known as a “capital cost allowance,” but not with the forms specific to COVID-19, said Gittens.

Do I need to have a dedicated office space to claim my home office? What if I’m working at the kitchen table?

Don’t worry, you don’t need four walls around your office to claim it on your taxes, said Gittens. Whether you’re working in a separate room, from the couch or at a desk in the living room, all you need to do is calculate what portion of your home’s total square feet you’re using, and claim accordingly.

What Kind of Proof Do I Need to Claim These Expenses?

You’re not required to keep proof if you’re claiming the simple deduction up to $400. Otherwise, you need to keep your bills and receipts for everything you’re claiming, said Gittens. She recommends buying things like cleaning supplies, light bulbs and paper on separate bills to make the purchases easier to track, and taking photos of physical receipts in case they fade.

How Long Should I Keep the Receipts for?

Gittens recommends keeping the receipts and other proof you’ve gathered for at least six years after you’ve filed your taxes.

What Else Should I Know?

Gittens recommends looking into every available credit or deduction you qualify for. First and foremost, if you’re able to, she recommends contributing to your RRSP in order to lower your taxable income. She also recommends keeping track of charitable donations, as you can claim these too.

The spouse making a higher income should be the one claiming these deductions, she added, while the spouse with a lower income should claim any credit that’s based on percentage, such as the medical expenses tax credit, which is usually three per cent of the claimant’s net income.

Above all, Gittens said this is the year to be prepared and ask questions ahead of time.

“It pays to be prepared,” she said.