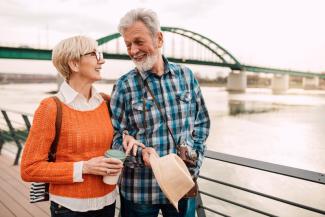 Life Insurance Can Be a Core Strategy for Retirement Savings

In 2001, Carey McWilliams obtained a permit in North Dakota to carry a concealed weapon. The thing that makes his story so unusual is that he’s legally blind. Mr. McWilliams had satisfied the state’s shooting test by hitting a human-sized target 10 times out of 10 from a distance of 21 feet, or 6.4 metres. Today, he has permits in five states. Even though Mr. McWilliams is blind, he hits the target every time – once someone points him in the right direction.

Retirement planning can be like this. Many people can’t see how much income or savings they’ll need to make ends meet in retirement, but if someone can point them in the right direction, they might just hit the target.

I’ve been trying to help with this. In my article earlier this month, I mentioned eight core strategies to paying for life in retirement, and talked about life insurance as one of those core strategies. Today, I want to share how this can work.

Seven years ago, a close friend of mine, Scott, came to me concerned about how he was going to generate income in retirement. He was 46 at the time, and was behind in saving for retirement. He’s a business owner and had been plowing virtually all of his savings into his business to expand it (a common scenario).

We talked about insurance as one vehicle to help him create the cash flow he and his wife will need in the future – about $100,000 after taxes annually. They did implement an insurance strategy that is expected to provide them with about $44,000 of that cash each year. Scott has been paying insurance premiums on this policy since 2013, and in another three years the policy will be “paid up," meaning he can stop paying premiums at that time.

How does this actually work? Scott approached a trusted life insurance professional and had some projections done. At the age of 46, he purchased a whole life insurance policy with an initial face amount of $1,275,000. The premiums are costing Scott $50,000 annually. Yes, that’s a big number, and Scott could have opted for lower annual premiums, but he wanted the policy to be paid up after 10 years. (As an aside, it’s possible to borrow to pay your insurance premiums so the cash-flow impact today is minimal; a topic for another day.)

Each dollar of premium that Scott pays is used for two things: Covering the charges for the insurance itself and making a deposit into an accumulating fund inside the policy. That accumulating fund is known as the “cash value” of policy.

After 10 years, the cash value of Scott’s policy is expected to be $576,000 (every case is different, but it’s not unusual to have the cash value to be equal to or great than the amount you’ve paid in premiums by the 10th year). If Scott were to die on the 10th anniversary of the policy, the total death benefit that would be paid out, tax-free, would be about $1,896,000 (the initial face amount, plus the cash value, with some other adjustments that an actuary would have to explain; your insurance adviser can provide the projections). Scott can withdraw the cash value at any time if he wants, but it would be taxable as regular income, so he has a different plan.

Starting at 65, Scott is going to receive $44,300 annually. How? He’s going to visit a bank and borrow $3,692 each month (about $44,300 annually) to use in retirement, using the policy as collateral (which many banks are glad to do; they’ll typically lend up to 90 per cent of the cash value). This is not taxable income. Loan proceeds are tax-free. There will be an annual interest charge on the borrowing, which Scott plans to capitalize (he won’t pay the interest annually, but the interest will be added to the loan balance over the years).

Scott will plan to meet the balance of his cash needs in retirement using other strategies. You don’t have to structure your insurance plan exactly like Scott has. You could borrow less, or not borrow at all. You could reduce your premiums by stretching them out over a period longer than 10 years, or borrow to pay your premiums. You can choose to cover whatever portion of your cash needs in retirement that suits you. Speak to an insurance adviser about your various options.

This Globe and Mail article was legally licensed by AdvisorStream.